I had the opportunity to hear ballerina Misty Copeland talk today at Dillard University in New Orleans with our ballerina hopeful daughter and some of her barre friends from NOCCA. We got there extremely early–nearly 2 hours early as Lily had heard that it was going to be packed. It was by the time it started, but she managed to get the first row behind the VIP reserved seats. She got this fantastic picture of Misty.

Copeland, in case you don’t know her, is the first black principle dancer for the American Ballet Theater in two decades and barely any before that. She was a relative late-bloomer, and prodigy, having started at 13, she was en point three months later!! Pretty unheard of. She’s been a big hero for my daughter, who, thank heavens, is pretty color blind nor does she red line her inspiration. The President of Dillard caught the 2 minute commercial Misty does for UnderArmor in which a young voice reads the rejection letter Misty got when she was starting to dance, over the image of an unbelievably strong, dancing Copeland. It is so potent that it enamored me to her too when Lily showed me. He said he simply had to invite Ms. Copeland come to Dillard, to inspire his young students to NOT TAKE NO FOR AN ANSWER. 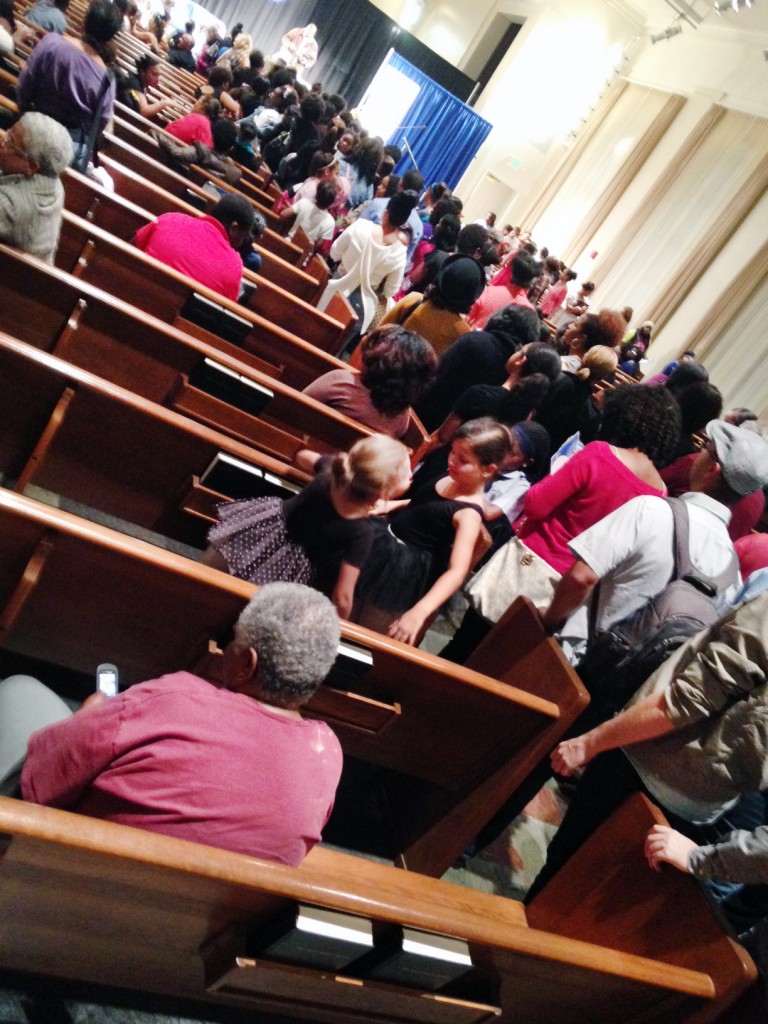 There was an abundance of little brown girls in the audience, and often Ms. Copeland refers to them in her new book,”Life In Motion.” In the introduction, she writes intermittently throughout her narrative:…”This is for the little brown girls.”  Copeland is breaking down barriers and her visit to Dillard was all about keeping the ball rolling, scoring strikes the whole way.

My girl isn’t brown, but she did start late in ballet, and was told when we moved to New Orleans (from a prestigious ballet school here) that she couldn’t go into the class where students were at her level–she was just too old for it. Adieu. At NOCCA last year with only a year of ballet from another school, she finished her freshman year as “the most improved dancer” in the Dance department according to some of her teachers at her year end review. And this summer after studying with Ballet West through NOBA’s summer program, she decided to be a ballerina. She works hard at it now. She on her fifth pair of point shoes since the summer (her “auntie” Joanne is her shoe patron, thanks, Jo), and she studies point privately since they don’t put the sophomores on point at NOCCA.

We’re just coming to understand, Dennis and I, what ballet parenting is all about, so Misty, thanks for the lessons tonight. We don’t want to Black Swan Lily’s career, so we need some source on how and why and where in the ballet world, just like we had to figure out the same for a dyslexic student with brains who could easily have been brushed under the rug. So we’ll keep you posted and try to make intelligent decisions, read Misty’s book, talk to Lily’s ballet teacher who is helping us with direction, and let Lily make the decisions and commitments it will take for her to succeed in this world.