So my daughter is off tonight to see One Direction at the Superdome with her friends on tickets we bought her for Christmas last year. She is so psyched. NPR said the Dome is gearing up for thousands of little girls–ours is almost 16–to converge all over Poydras Street and warned of traffic jams and stoppages.

It reminded me of this piece I wrote in late 2009/early 2010 about our life in Amenia, NY when we were on the verge of big changes. Here’s a post that helps define what length we go to to help our kids get over the potential threats to their full achievement.

And now: Sleeping with the Jonas Brothers—

It’s a humble second-story flat. We sleep on mattresses on the floor, the woodwork surrounding the door jam—heck, most of the door jams—have yet to be completed. There’s a folding paper shade over the west window that faces the brick building next door, being converted into a coffee house. That’s the window you can see into from the sidewalk. Most times we leave the shade up; it’s not a heavily traveled street. A castoff rug, unrolled to show only a few small stains covers most of the dark, fake wood flooring, surface-grained with darker knots: A good fake floor. It all adds some hominess, though mostly the place reminds visitors of their college apartments. It is very “college apartment;” only we have two bedrooms.

We sleep in the back bedroom, on the sunny southern side of the house. From the front bedroom, we can pick up the wi-fi from the library across the street, so that room has become more of an office, the room where we sit and watch “Glee” on Hulu, our favorite.

We’re only here Monday thru Friday, a fact, which no doubt adds to the college apartment mentality, that and the mattresses on the floor, the mismatched sheets, the scavenged but antique furniture and furnishings, and Lily’s iPod blaring whatever she’s into at the moment.

That’s how we came to be sleeping with the Jonas Bros. She’s like, addicted to them. Loves their music and, okay, so do I. Joe is my favorite; Nick is way too swarmy in the way the young Marlon Brando was swarmy, oozing with self-possessed sexuality bulging from his biceps. You’d imagine he’d only need a mirror to get off. Kevin, of course, is out of the picture now that he’s married. We could take his picture down, but it works with the three of them. Kevin cudda been a contenda, but for me, it’s Joe.

I don’t think Lily’s made up her mind on them, just as she vacillates between Edward and Jacob, but mainly stays with Jacob. She’s young yet. She cried last night when we read aloud Jacob’s epilogue of “Eclipse.” Now we have to go to the library and order up the fourth Twilight book. I can’t wait.

The Jonas’s pictures are plastered on the wall, torn out of the Rolling Stone issue her dad bought her. At least Lily taped them up neatly, all in a row, but she chose the long, windowless wall and well, they dominate the bedroom. I’m glad my mattress is the farthest away from Swarmy.

On cold nights like last night, Lily doesn’t like to sleep alone, so she cuddled up with me. I got up, plugged in the space heater, and when she’d nodded off again, I moved onto her mattress. One of the objectives of moving here besides going to Kildonan is/was to get her to sleep in her own bed—hence the twin mattresses. So if it takes the Jonas Brothers to give her solace, so be it. She’s eleven, what more can I ask?

We’re here, Mon.-Fri. on a mission. We decided these things as a family, my husband Dennis, our daughter Lily and I, together. Predicated on the fact that The Kildonan School was and is 100 miles north of where we lived and live—past and present becoming oddly the same—and it being the perfect school to treat her dyslexia, what with their 1-on-1 daily tutoring, small classes and exceptional horseback riding program, we plotted a not so little lifestyle flip, that for the most part seems to be working.

We call it our “Schooling Segue,” though really it is so much more.

On Mondays Lily and I drive up at 5AM to arrive here by 7:45. We might stop for breakfast—a drive-thru perhaps. Lily goes to school, I go home, unload the car of clean laundry, laptop, stuffed animals—you get the picture—come upstairs and check e-mail to see if clients need me (thank you, God, for the Internet), usually they do, so I avoid the unstashed clutter till I find time to put things away.

This is a very different place from our home in Belle Harbor, Queens, a block from the ocean. We are overrun at times with “stuff” there—paperwork, yardwork, a garage and attic full of castoffs collected from the trash or the dumpsters at “As the World Turns” where Dennis works as a set decorator. Each of us inherited earthbound relics from deceased partners: all their worldly possessions now in our possession.

The residue of our past lives—my client samples: six and a half years of printed Perry Ellis pages and Donghia furniture catalogues nearly bow our attic trusses with their dead-tree weight. Dennis’ decorative painting supplies of gold leaf and tincture of such and such present themselves in odd places when we are trying to create order at home. It has to, had to, whatever, change. So, unable to do it outright—his job, my clients, the real estate droop, basic inertia—segue was essential.

In first finding a school that offered not only a way for Lily to overcome her weakness, but a way to fuel her passion for horses, “I want to be a jockey!” we looked at our beleaguered lives and put twos and threes together and it started to make sense.

Thinking about it, Dennis’s show was bound to close (it has since been cancelled from the CBS lineup as of September 2010). It had only been reupped for a 1-year contract as opposed to the standard 2-year contract for soaps, so the soap scum was on the wall, especially after “Guiding Light” went dark. And dammit, I was feeling a need to get on with my persistent desire to write that had been back burnered through childrearing and then working my tail off to pay for private schools in light of the local pubic school’s failure to educate Lily. Budget cuts further complicated things in Dennis’ as well as my life. What were we holding on for?

In addition—since change was in the air—maybe we could eliminate TV as Lily’s closest companion? change my eating habits? pare down on possessions? get Lily out of our bed, thereby improving our connubial bliss. We decided to go for it—Making Segue!

Part II: For the record, it is January 5, 2010, Lily’s first day back after Christmas break—sorry, but I still call it that and will. Frigidly cold, we fight to get out of bed, having come up the day before, and warm up enough to eat, straighten her hair and get to school on time.

Lily is eager to get to school (yea!), to meet the new girl who starts mid-year. Lily loves math and literature and history, subjects she barely looked at without a frown. She does all her homework at school, which makes my evenings delightful times spent reading with Lily, cooking, or writing. 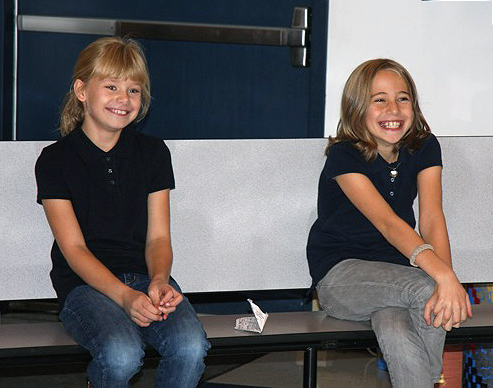 In pulling together her records to send off to the lawyer who will plead our case for partial tuition reimbursement I note these crucial aha!s as credence to this segue construct of ours. 1/ The Kildonan School grades students in three measures: B= beginning; D= developing and S= secure.  It is remarkable to have found a school where the highest mark your child can receive is SECURE. Wow. 2/ In Lily’s first trimester report, she scored zero Bs, twenty-three Ds, and thirty-four Ss, including 10 straight Ss for Elementary Riding, a full class period and graded as such, not an extracurricular activity such as Art and Music and Movement for which she received one D each.

While Lily received 10 Ds from her self-proclaimed “tough” Math teacher, her only S from her was for “Tests and Quizzes.” Lily loves Ms. Neiman. It’s not that grades are everything, but to have Lily fighting to do well is the child my husband and I are meant to have. She resembles us at last, and I know where she is coming from. She fought my plan last month to skip school for a day to go to NYC for a doctor’s appointment because it would ruin her perfect attendance, and when an alternate plan to leave early was suggested, Lily emphatically replied, “But I can’t miss my Math test.”

Is this segue working? It appears, from Lily’s perspective, to be going great guns. It’s difficult to leave my husband week after week. Last time I left he was sick; he called from the doctor to tell me he was breathing at 47% lung capacity and he had been instructed to clean the bedroom 29 times. I kid you not. I wanted to turn the car around and drive home and start vacuuming, maybe I could prolong his life!

Our time together is very valuable. Lily’s and mine, yes—we read together—volumes of things. It’s helped my writing. I can’t wait to get to the next Twilight book as much as she does. But the best laid plans…it is tough to get to Brooklyn to see my clients enough. And Dennis and I miss each other tremendously. Since the day he heard about his show closing, Dennis has been redecorating the Belle Harbor house readying it for the market, indubitably stirring up the dust, which doesn’t help his asthma much. The one weekend he came here since then, he sewed curtains for the sunny bedroom and surveyed the flat anew, sizing it up as a family residence, at least for the short run.

Making segue gives us a platform for looking at our lives, what works, what doesn’t. Things don’t stay static though, we have many new things to consider—co-pays for this lung problem alone were $84, and what will we do without health benefits? And the doctor says get rid of our Labradoodle, Dixie. Lily is beside herself! Then too, maybe the Board of Ed will consider us renegades at 100 miles north, and we won’t get any settlement and that will draw an end to this exercise in finding our way. Still, we have a 2-year lease and mean to keep it, and hope that good will continue from our attempts. We’ll keep thinking, and looking and finding ways to change for the better, if only in short hops, in segues.