Designing for that first Perry Ellis show was hampered by Rea Lubar’s art direction to go pink. The collection–Spring 1979–had some pink, but Perry was launching, not a pink line, but a full blown collection. His time had come. And my time to impress him with my graphic abilities was running short. This invitation needed to bespeak the Perry Ellis about to emerge and after two rounds of design I was feeling down on myself.
Then I got the call. It was Perry, could I meet him at 1441 Broadway in the lobby in 20 minutes? Yes. Good, he had something I needed to see. My studio was 2 stops down from Times Square on the R line; I got there first.
Perry arrived alone and bounded up a dark but grand stairway that looked like it hadn’t been used in a decade. It opened on to a mezzanine landing leading to a dazzling if dusty quadrupled height “ballroom” for want of another word. Four hugemungus brass carousel chandeliers hung about halfway from the paint-peeling ceiling, otherwise the space was echoing empty. Perry spun around like Marlo Thomas in the opening sequence of That Girl, “It used to be a bank; look the vault is even still here, we might have to leave it.”
It was spectacular, the windows looking out onto Broadway were maybe 30 feet tall, and lined that side of the gallery. It seemed improbable that it would be ready in time for the show, we barely had time to print invitations. “We’ll clean it up as best we can; paint the ceiling…I want everyone to know that we haven’t fully moved in, maybe fill it the space with cardboard boxes, shredded newspaper…”
“I have it,” I said, wanting to race back to the studio to design the invitation. Whatever I had to see, I’d seen it, and inspiration was gushing out of me. The timing was perfect as someone on his team joined him and gave me my out.
One of the first art shows I went to in NYC, was Japan House’s “How to Wrap Five Eggs”. I was smitten. I’d been a paper aficionado and always eyed those packing sheets laced between layers of fruits, wishing I had a use for them. Now I did! 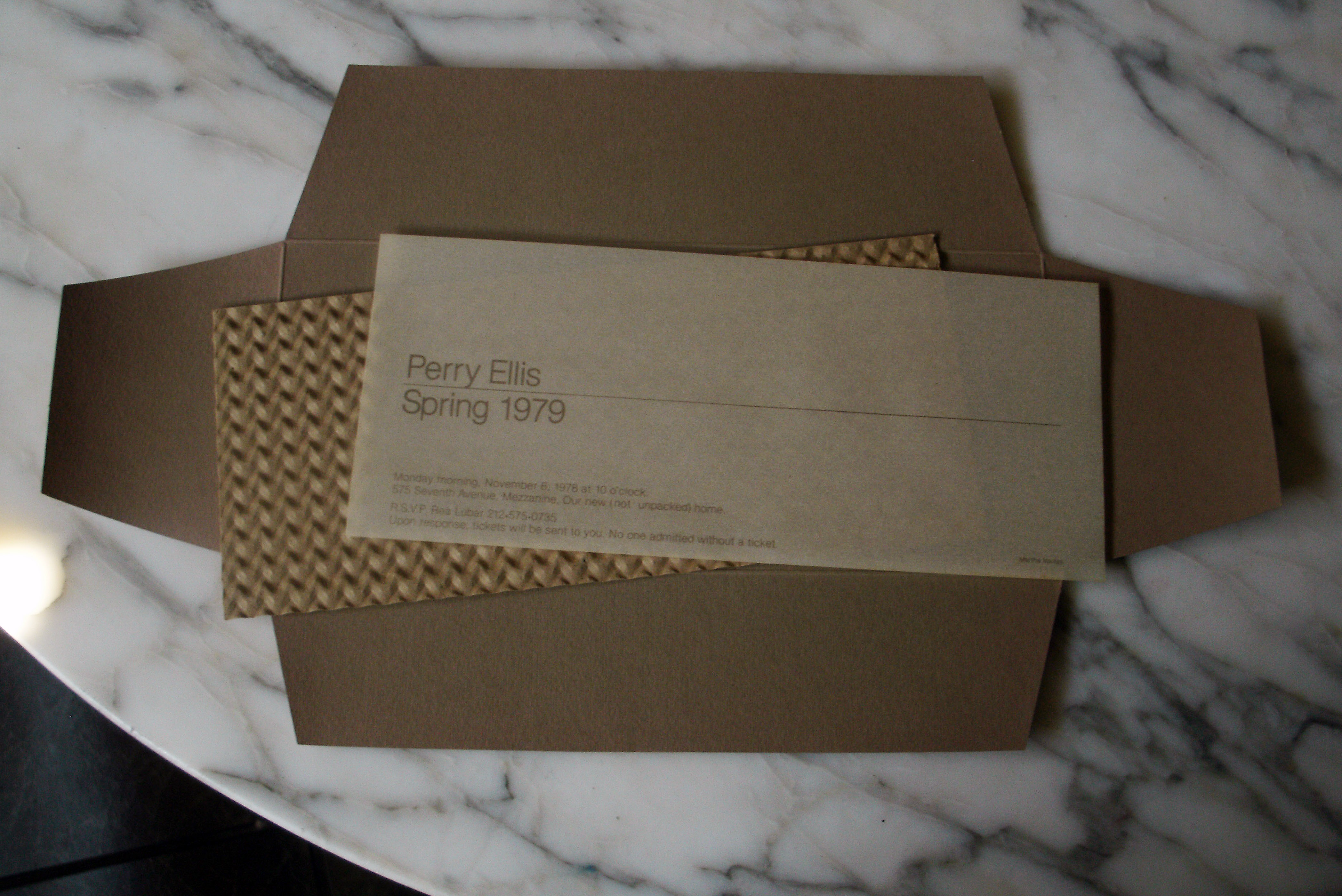 The three textures were telling of Perry’s sensibilities: My packing matter protectively shielding the voile-like artist’s vellum, and the heavier cover stock, scored and die cut to fit, wrapping it all neatly together.  We always hand addressed. Simple and elegant. And I’m happy to say, just the incentive Perry Ellis needed to hire me to design his corporate identity. But that’s another blog!